NEWS: Digital versions are out now! 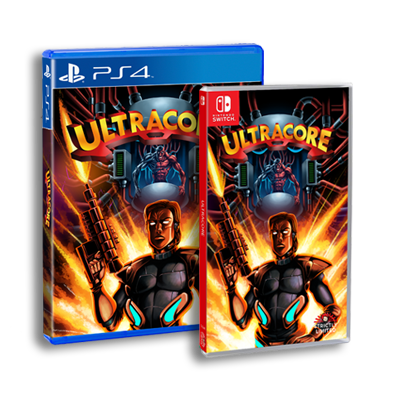 The limited physical edition of Ultracore for Nintendo Switch and PlayStation 4 are sold out!

Pre-order of the standard edition was only be available for a limited period of 8 weeks and exclusive to our store www.strictlylimitedgames.com.

The digital version of Ultracore for PS4, PS Vita and Nintendo Switch are out now. Please check the Nintendo eShop and PlayStation Store!

Ultracore – A Part of Gaming History

Discover adventure in the field of game-archaeology!

Our first quest leads us to a long lost treasure of Swedish gaming history: During the early 1990s, the Swedish video game developer Digital Illusions (also known as DICE) started working on their new game. Developed for Commodore Amiga, Sega Mega Drive / Genesis and Sega Mega-CD, the game was about 99% finished. It already got early previews in many gaming magazines, promoting their “excitement at the fun and guns of Hardcore” (Sega Power, 1994) .

The expectations were high and all the signs were pointing to another hit. But then, out of a sudden, Hardcore was put on hold due to a shift towards the new generation of gaming consoles, most notably the powerful Sony PlayStation with its incredible 3D graphics.

This was a shock for everyone involved, especially for the developers who were committed to their project and working very hard. For the following two decades, the game was considered to be lost forever.

But in 2019, an important piece of video game history was brought back to the gamers under the new name Ultracore!

From Past to Present

Except for a few people, no one has ever seen or played this gem. But thanks to friends and our wonderful ‘A-Team’, the original data has finally been recovered. So after nearly 25 years of deep sleep, Hardcore was finally published in 2019 under the name Ultracore!

Ultracore was being developed using original Sega Mega Drive development hardware. It will then be ported to run on modern platforms. We finished the game the way it was meant to be played!

Everything was being handled with care, to guarantee gamers get the best possible version of this masterpiece.

The limited physical Edition and Collector’s Edition were exclusively available at our website www.strictlylimitedgames.com

“I know the care, love, sweat and hard work that went into creating Hardcore in the first place by all involved parties. Thus, I think it is fantastic that this product finally gets to see the light of day and for people to be able to play it finally.”

Sign up to our Newsletter and stay tuned about Ultracore and Strictly Limited Games.